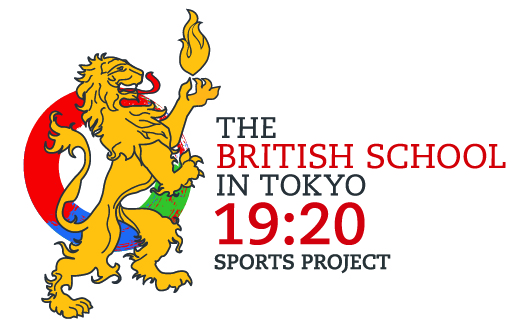 In partnership with the University of Tsukuba

In response to an ever-increasing range of physical abilities within society and in preparation for the Tokyo 2020 Paralympic Games, we created the first of its kind adapted sports educational programme; The BST Paralympic Project. The vision of the BST Paralympic Project is to give students the tools to understand more about disability through a 5-week workshop curriculum in partnership with the University of Tsukuba. The aim is to allow students to understand what causes difficulties for people with disabilities through both physical and mental barriers, and to then start thinking about ways to adapt sport and society to make them more inclusive for all. The BST Paralympic Project will act as a starting point for students to think critically about accessibility for those with disabilities in sport and in their environment.

To achieve this vision, the tasks for learning about physical and mental barriers were separated into 5 weekly workshops and supported in the classroom with an additional lesson. Each workshop explored a different theme in order to build the learning blocks that the students needed in order to be able to apply this knowledge practically and create their own adapted sport.

Students were able to experience multiple Paralympic sports including: Goalball, Wheelchair Basketball, Wheelchair Slalom, Boccia, Sitting Volleyball, Blind Football and the use of prosthetics. The aim of the week was to expose students to a wide variety of sport for different physical and intellectual disabilities and to inspire students to realise that sport for all abilities can be fun and enjoyable. 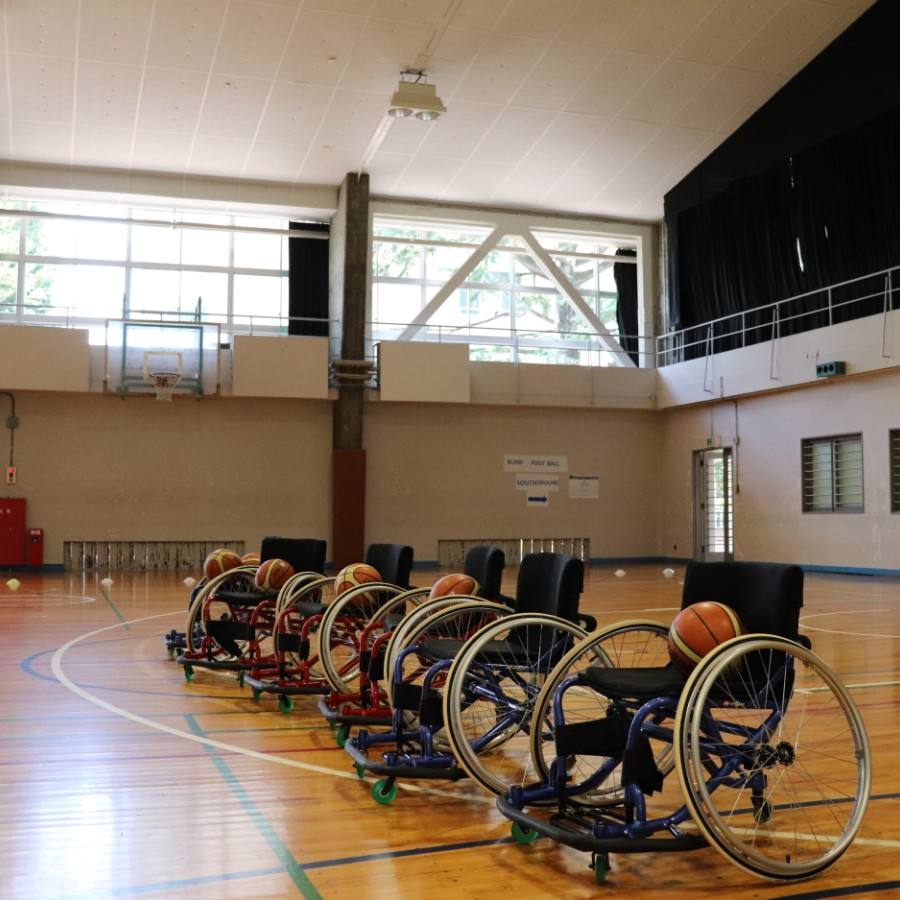 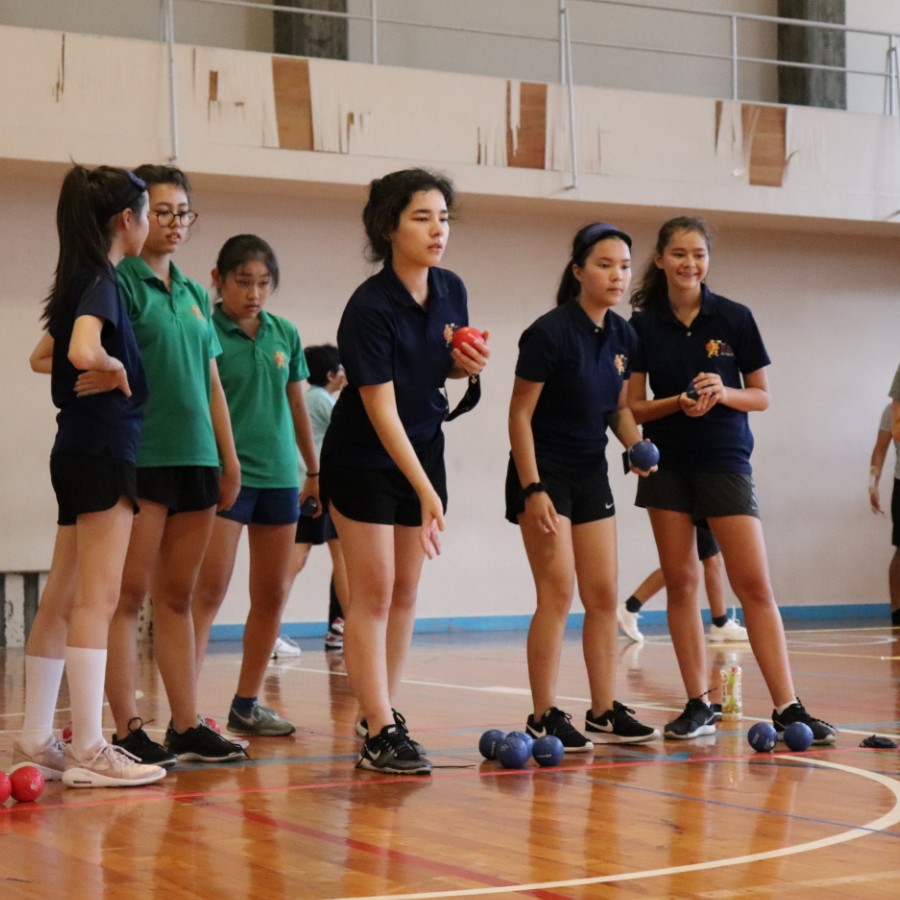 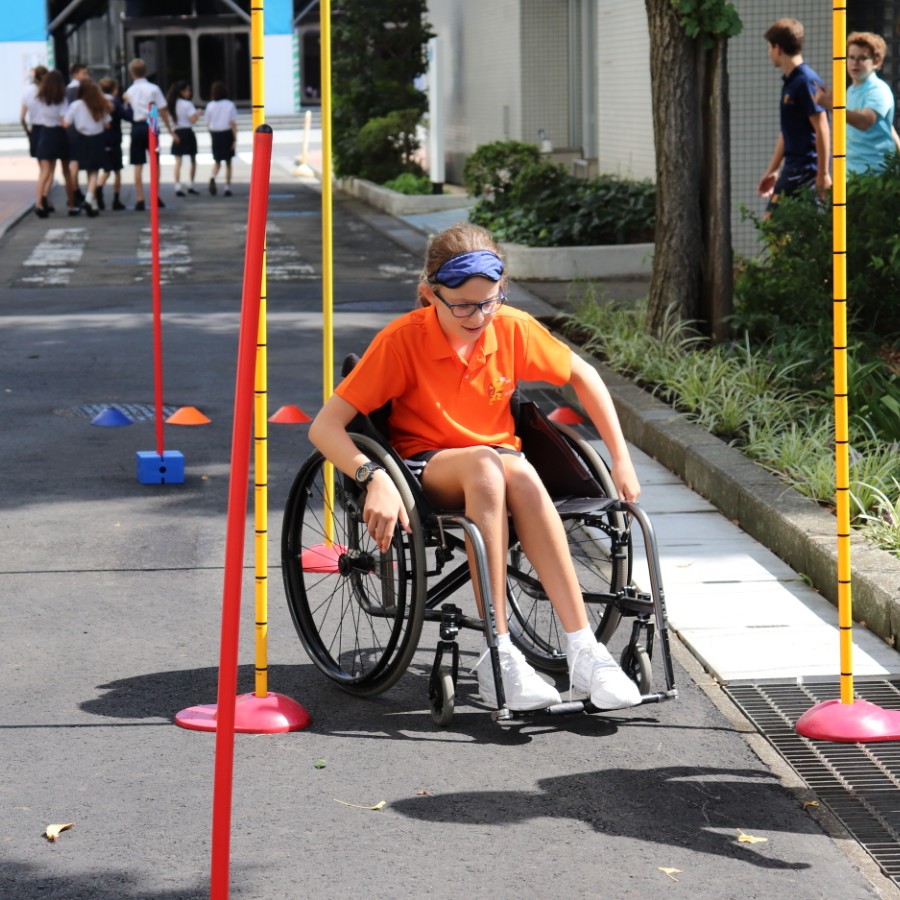 Students then followed up in the classroom by exploring the history of the Paralympic Games. Most students had little to almost no knowledge about the Paralympic Games, Movement and Values and so students were introduced to how the first Stoke Mandeville Games grew into the global phenomenon of the Games today. Students were challenged to work in groups to complete tasks based on major events and milestones in the Paralympic Games history. In this way the aim was to inspire students to see how the Games might continue to grow in the lead up to Tokyo 2020.

Students were divided into opposing teams and played against one another in a mini league of Wheelchair Basketball, Sitting Volleyball and Boccia. After last week's workshop where they simply played for enjoyment, this week’s aim was to incite competitiveness among the students while playing various para-sport. Like all sports, many of the students realised just how technically difficult and competitive para-sport is.

It was just as important this week to vary the sport and type of disability they were adapted for as much as possible with the space we had. Thus Boccia was included to get students feeling competitive about a typically less physically active sport, which was originally created for those with severe cerebral palsy. 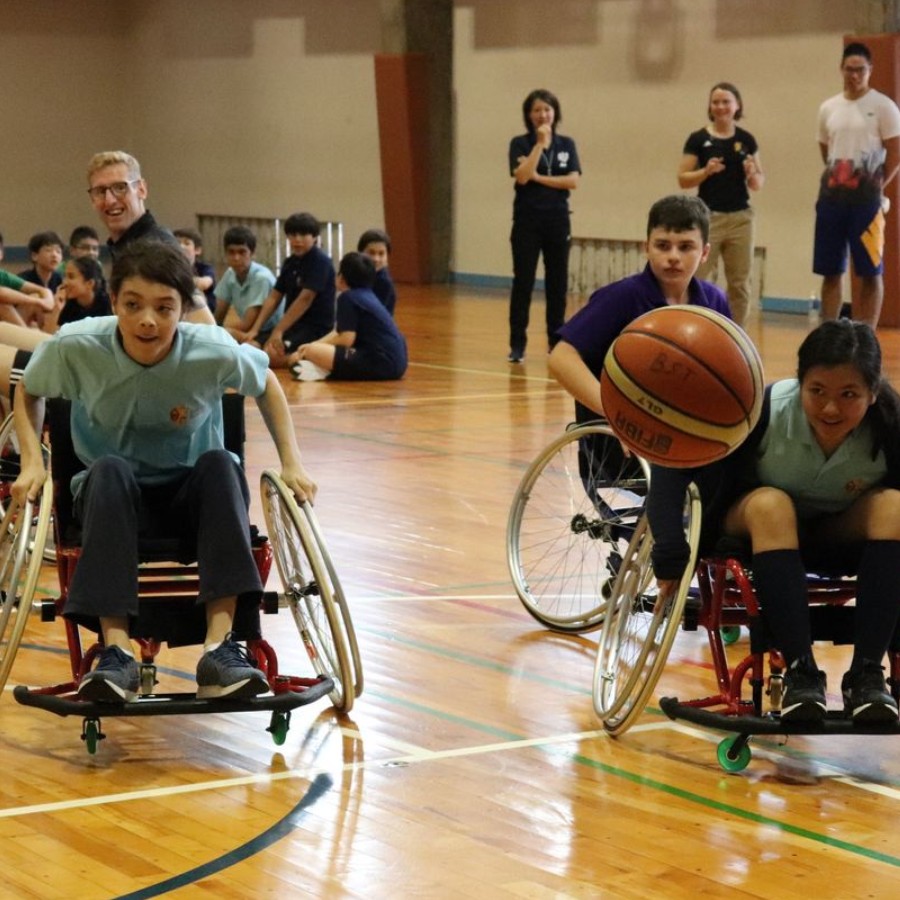 After realising the degree of difficulty and skill required to compete in para-sport, students were asked to tap into their journalist skills by investigating articles on famous Paralympic athletes. In their teams they were asked to work together to answer some key questions about their athlete, such as their sport, classification, impairment and life style. It was important in this session for students to see a tangible link between the sports they had played competitively in the workshop to the classifications in the actual Paralympic Games and also to the athletes that make up the Games. 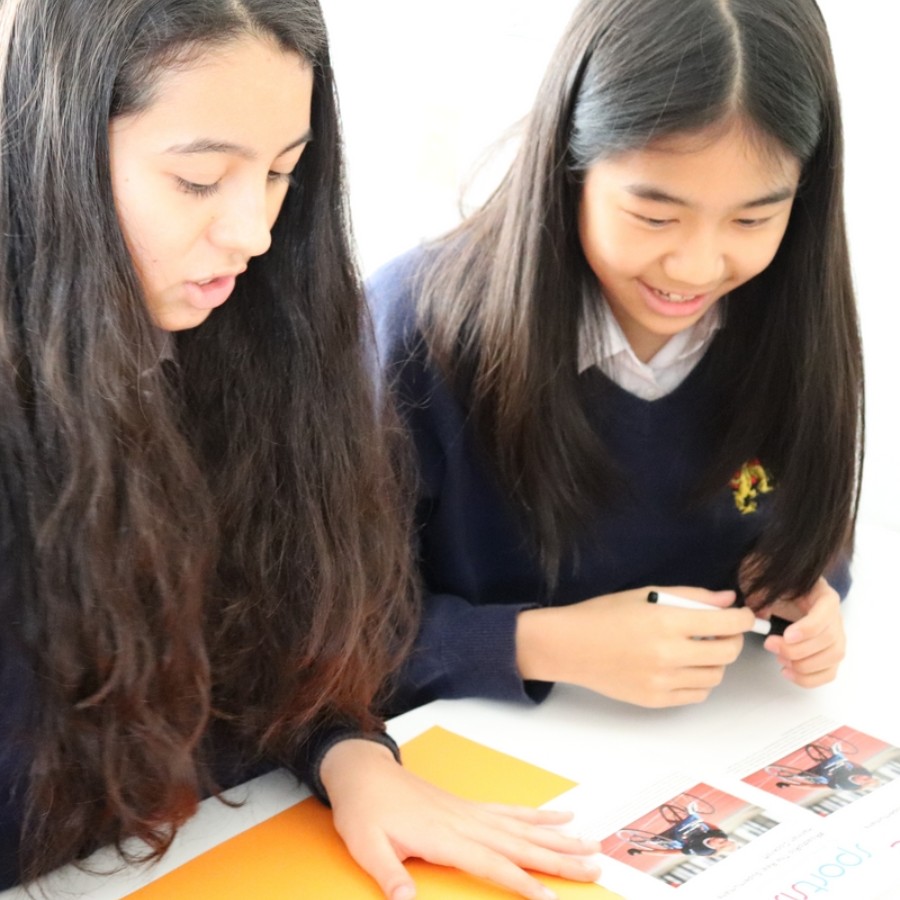 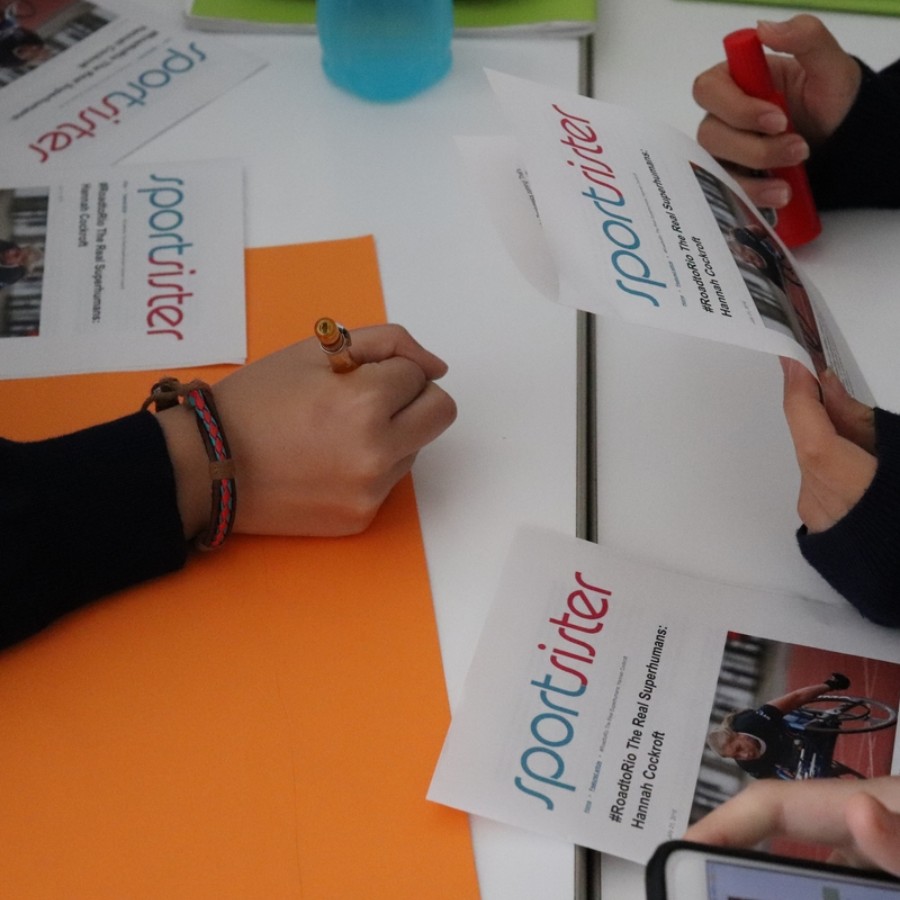 This week’s workshop challenged students to think about sports that they have experienced, such as rugby, football and baseball and to then adapt the rules for a certain impairment e.g. upper limb impairment. Students were given a short presentation on the fundamentals of adapted sport by Associate Professor Yukinori Sawae, from the Univeristy of Tsukuba’s Adapted Sports Department. Students began by brainstorming in their teams, beginning with the difficulties a player with an impairment might face participating in the original sport. Students thought about how to adapt equipment, court size and rules using the equipment available and the environment around them. They then applied these rules into practice, gathering the necessary equipment and testing out their rules to see what worked and what didn’t. 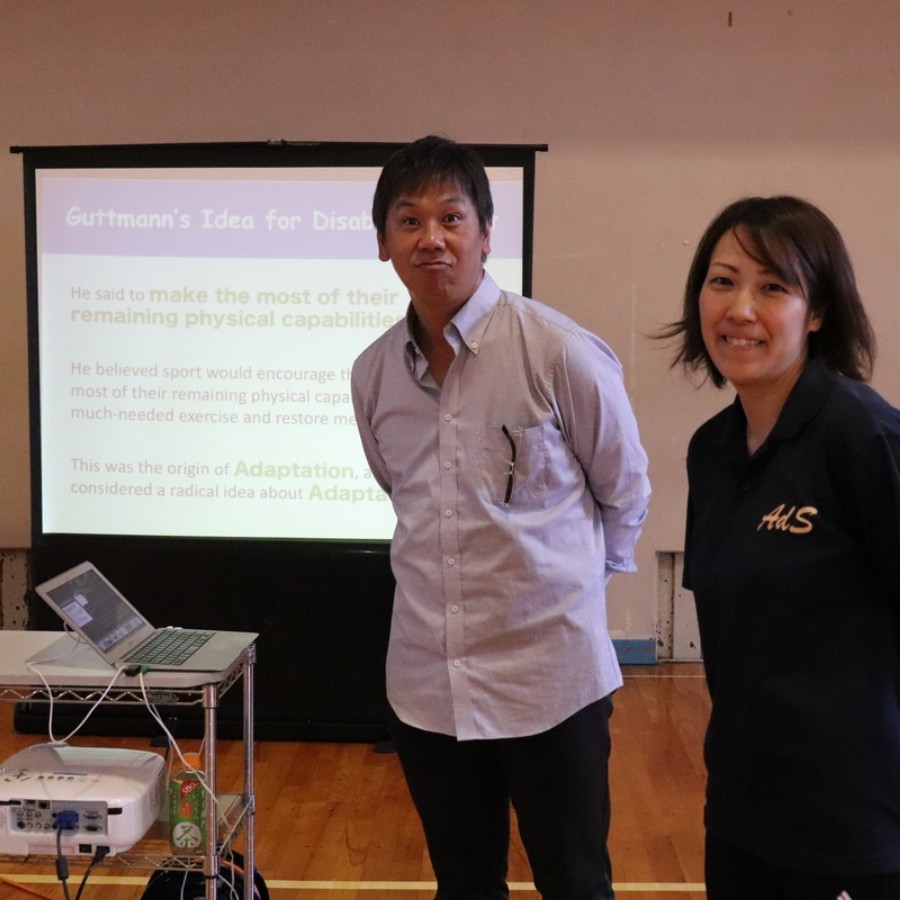 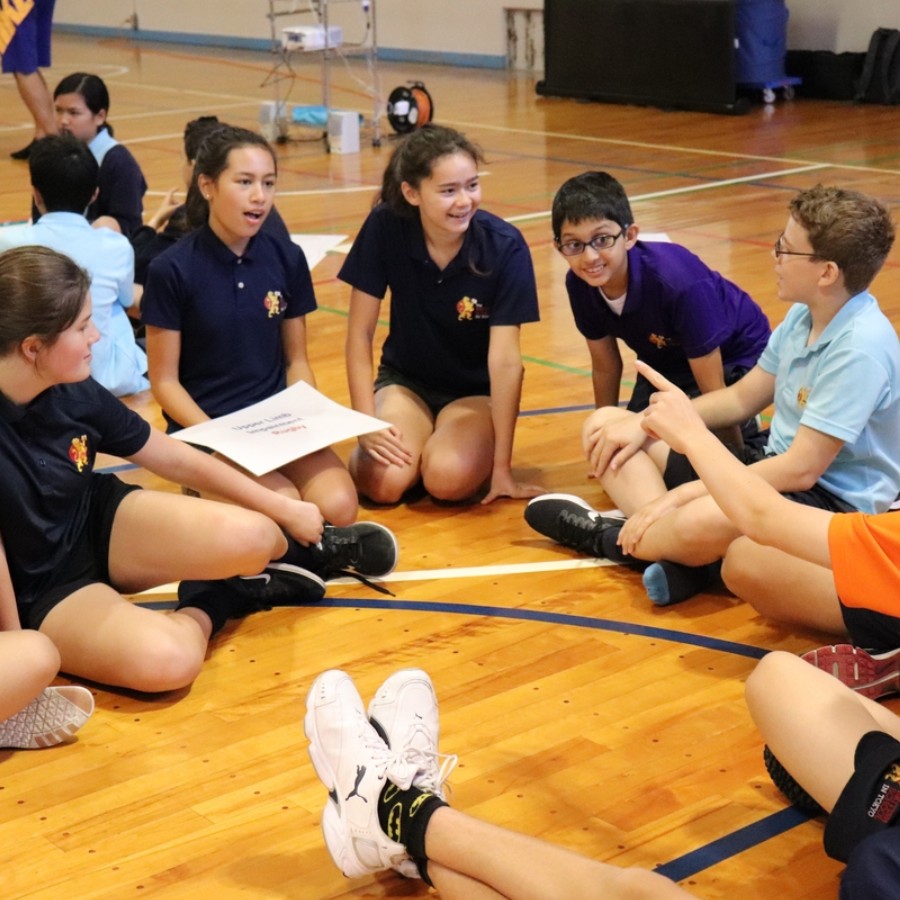 After practicing their adapted sport, most teams realised that there were a few adjustments to be made in order to keep their sport competitive, fun and inclusive. To help guide them in the right direction, each team member was given a ‘Rulebook’ to fill out, that included both the rules and regulations of their new adapted sport. 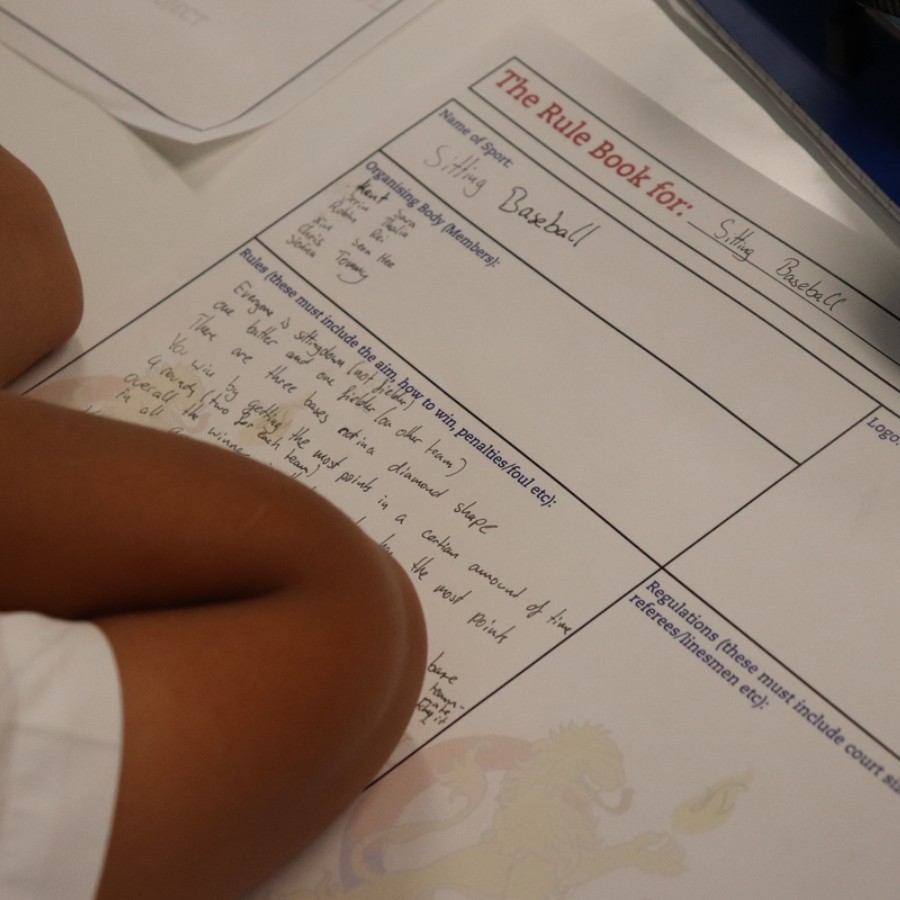 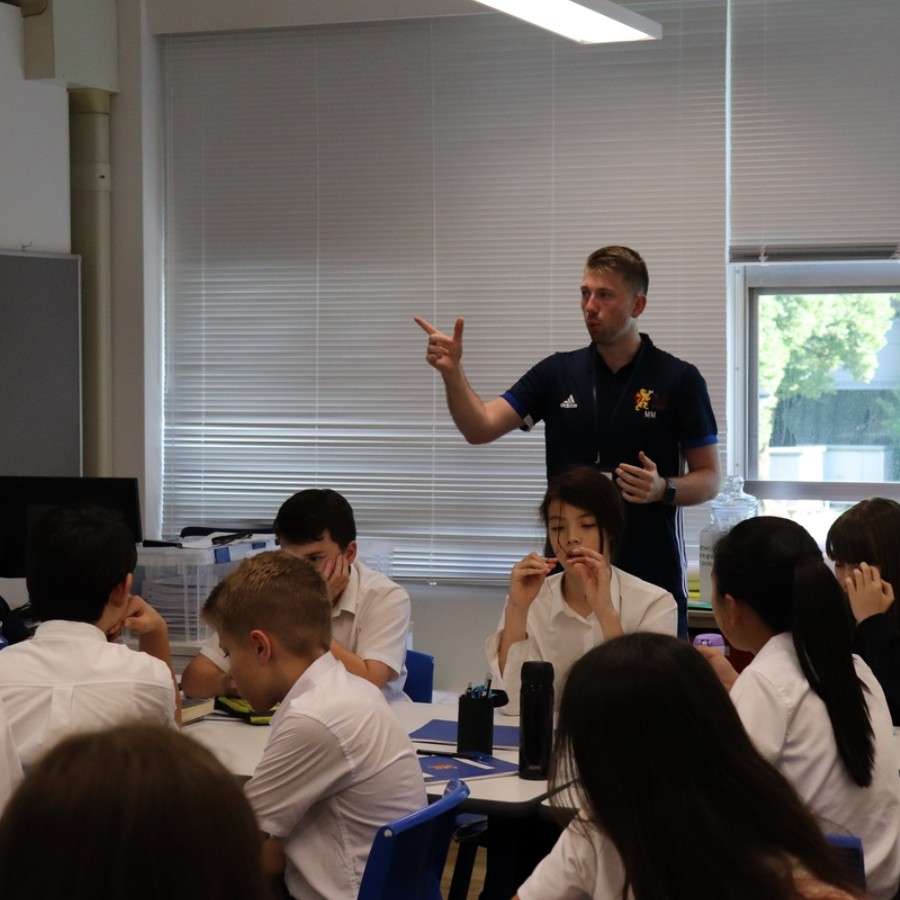 In week 4, students were given the chance to practice their adapted sport with athletes with an impairment (the same impairment to which the students were making adaptations for). They received advice and feedback from the guests as to whether their new rules were inclusive, while at the same time keeping the sport competitive and fun for all. In this way, students experienced the way in which real Paralympic sports are tested out and created. At the end of this workshop, each of the six groups ( 2 for wheelchair football, 2 for lower limb impairment baseball and 2 for upperlimb impairment rugby) presented their rules and then gave a demonstration of their sport. Students then voted for one of the two groups who they thought had best adapted the rules from the original version. 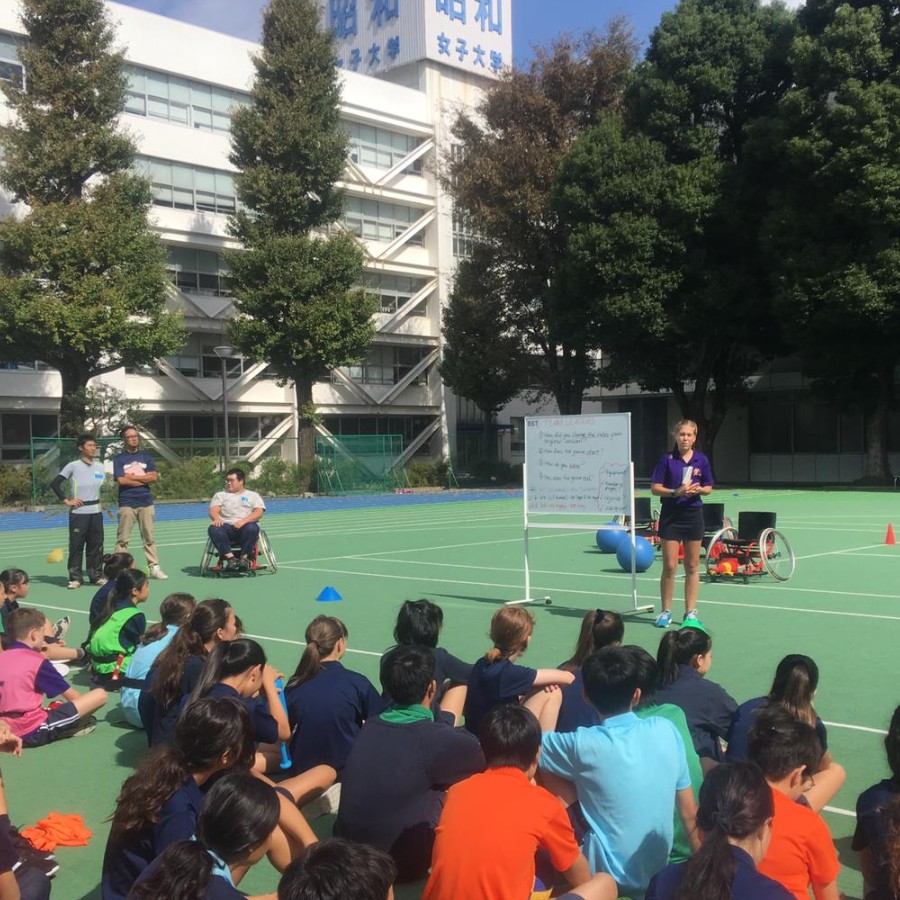 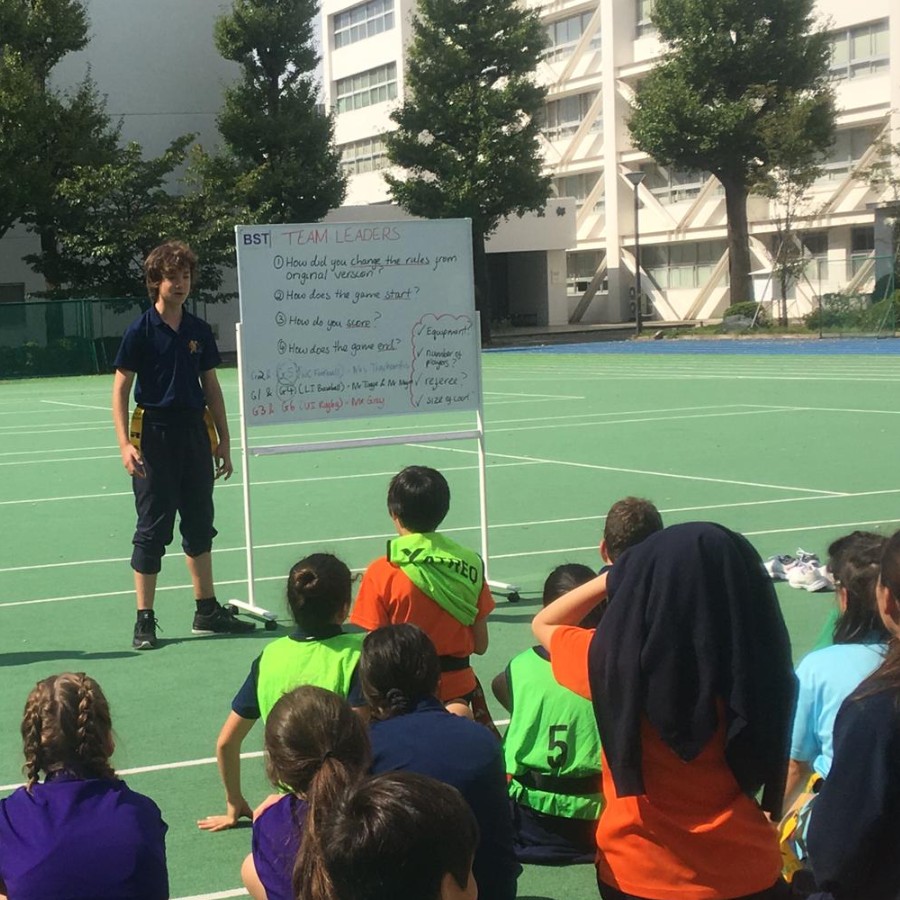 Winning teams were given the chance to have a final practice before their showcase on Sports Day the following week. The remaining teams debriefed what they thought went well in their sport and perhaps what could have been improved with hindsight, finishing with some heated debate on controversial topics surrounding the Paralympic Games. 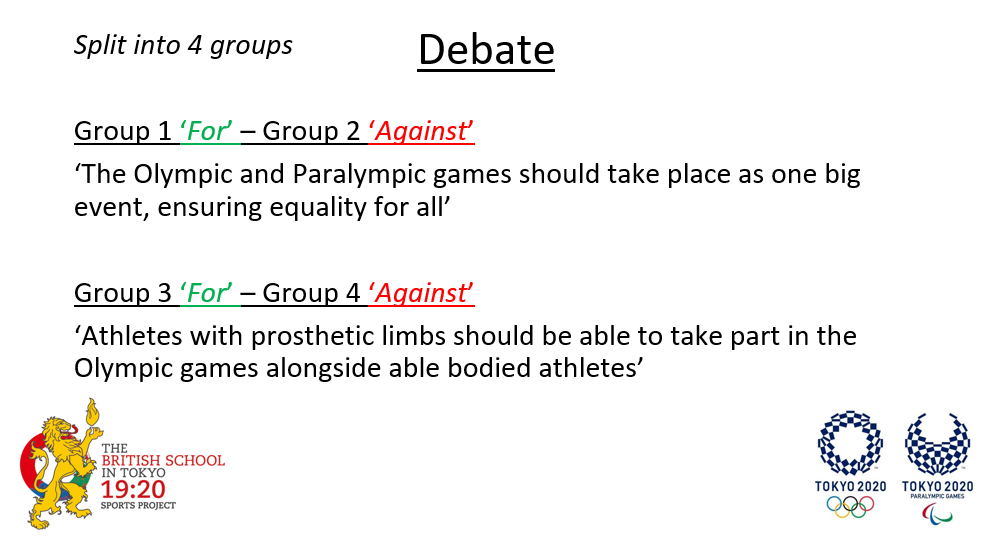 Finally on Sports Day, each team showcased their adapted sport in front of the entire school community and guests from the University of Tsukuba Adapted Sports Department. The elected team captains explained how they had adapted their sport before launching into a mini match. 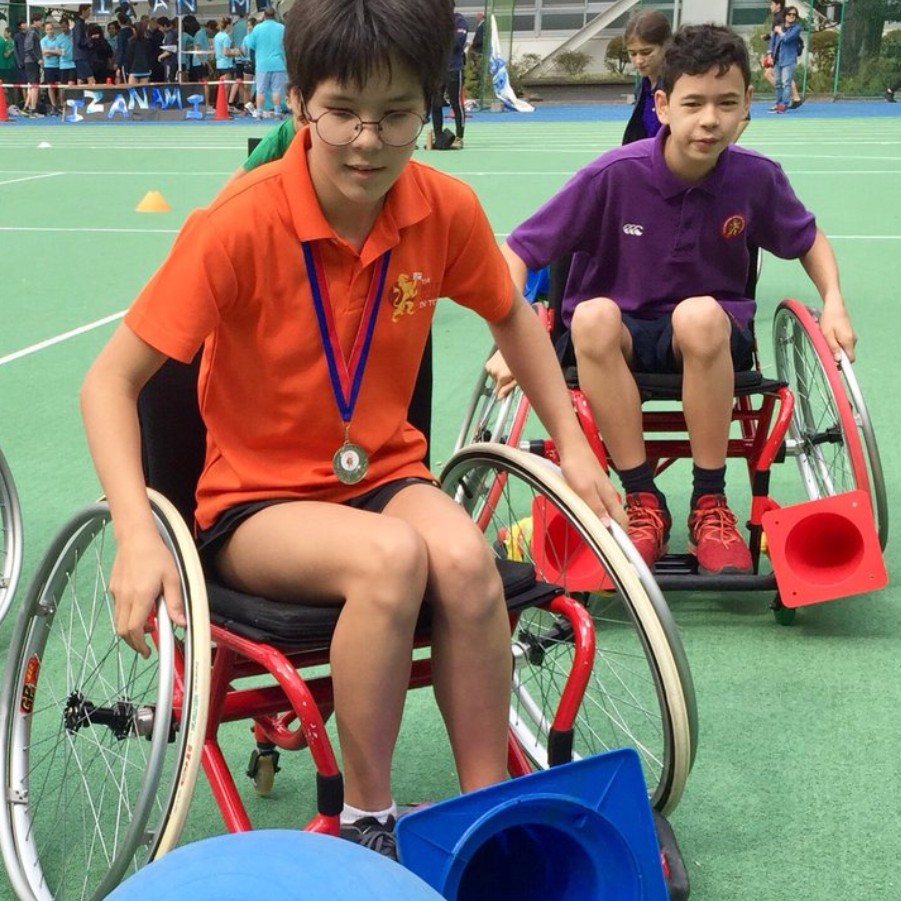 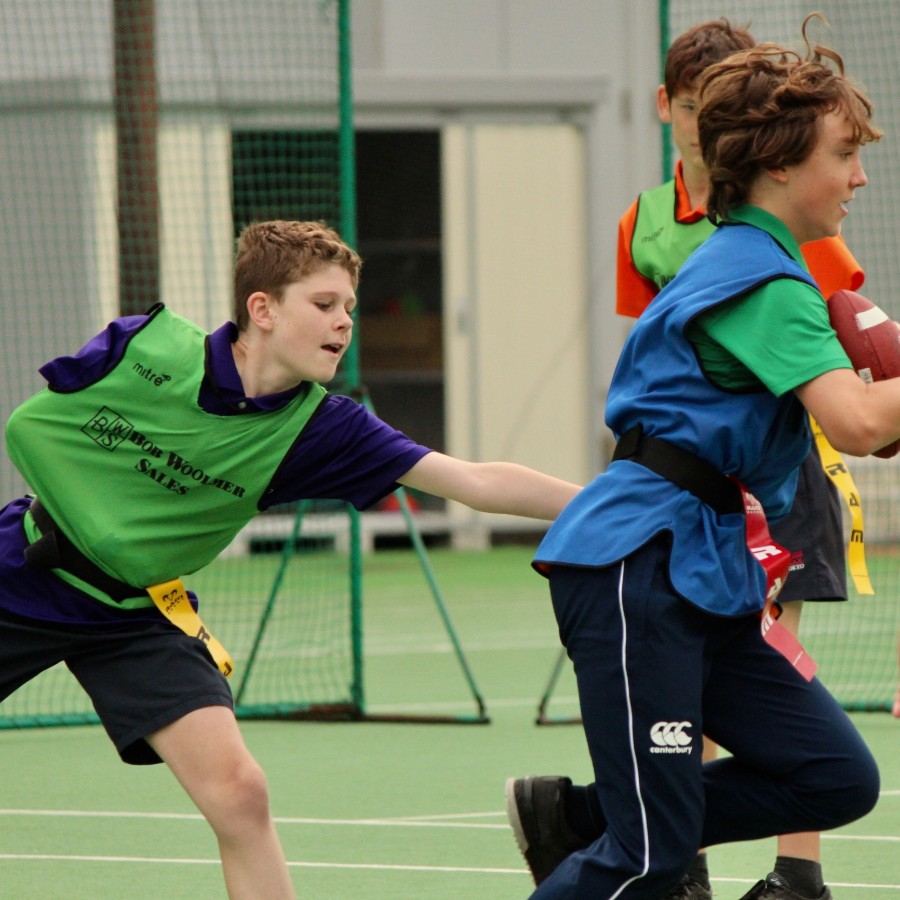 Students were given a final Feedback & Evaluation form to fill in on their experience of the BST Paralympic Project. 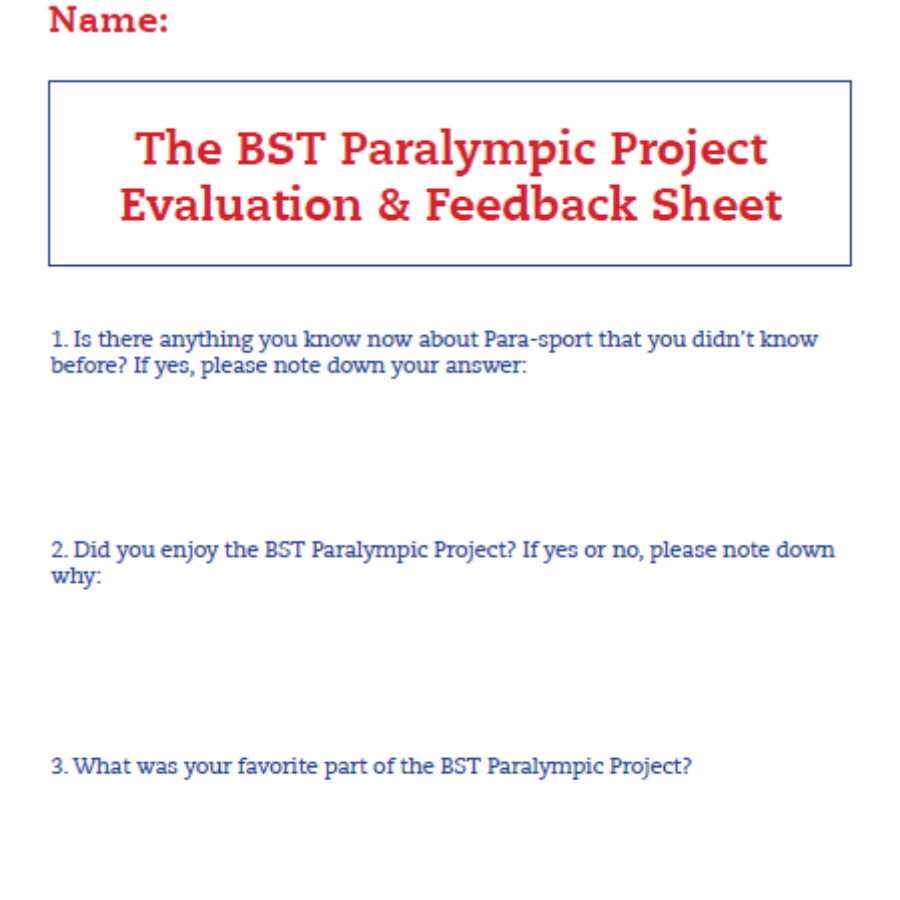 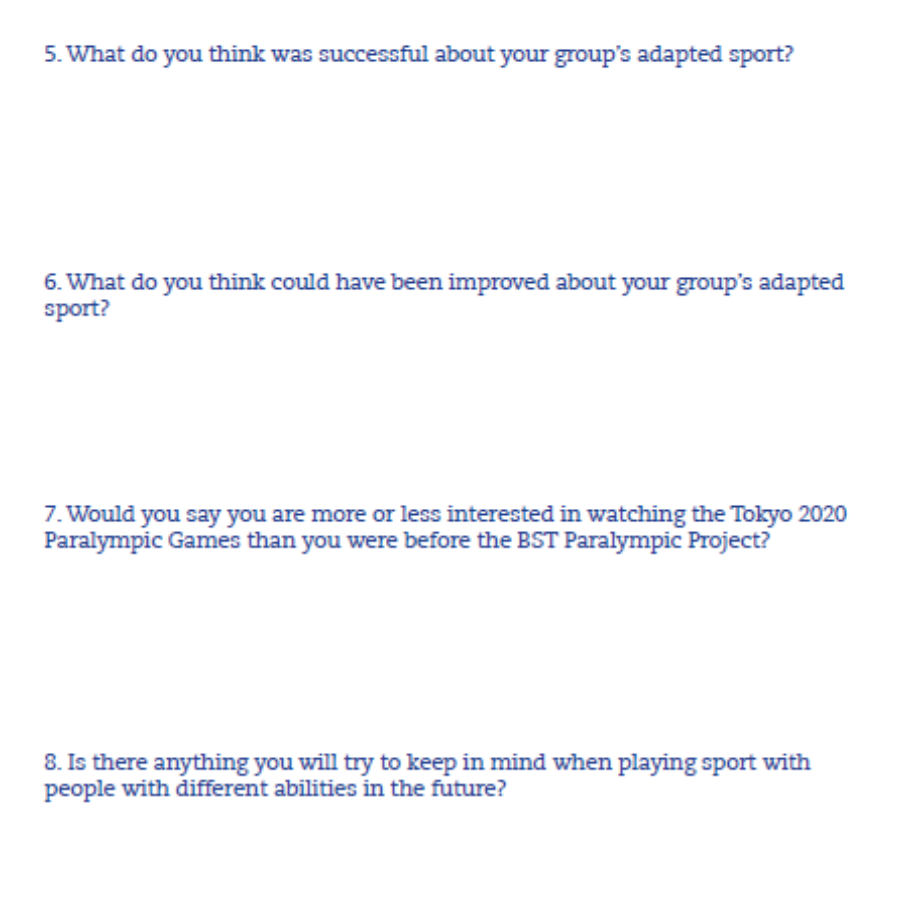 If you would like to receive the full BST Paralympic Project curriculum and lesson plans then please contact our 19:20 Sports Project Coordinator below.